After spending 20+ years in the software industry, Angel Cabrera and his wife decided it was time to find something they could do together that would be a fun and successful venture. After a little research, they came across Kooler Ice Vending Machines and the rest, as they say, is history! Since purchasing their first ice and water vending machine just a year and a half ago, Angel and his wife now own six Kooler Ice machines and have already chosen locations for two more. They own a mixture of IM2500s, IM1000s and IM500s that cater to the diverse needs of the coastal city of Jacksonville, FL. 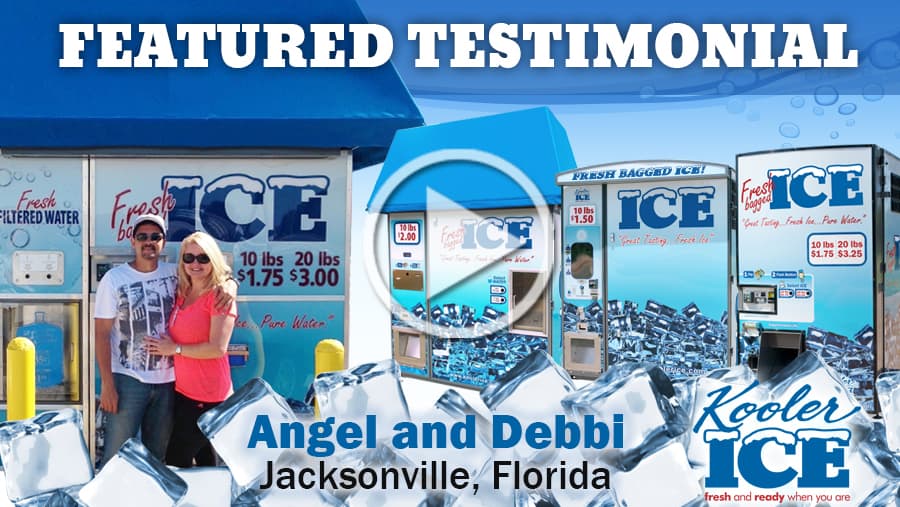 “My name is Angel Cabrera and we’re here in Jacksonville, Florida.

After sitting behind a desk for 20 years, I really just felt like I wanted to do something different. And my wife and I wanted to come up with something that we could do to, have something that got us out of the house, a business we could do together and something that was I think fun to do. We’ve all played in the stock market and real estate and things like that, but let’s face it, those are all things you really just have no control over. So we thought let’s get these machines, let’s put them around here. We know people love ice and water around here and let’s see how it goes.

The plan was to buy one machine for the first year just to get our feet wet and check it out. And when we started asking businesses whether or not we could put the machines on their property, the response was so good, next thing you know I’ve got three machines to start out with. And here we are a year and a half later, and we’ve got six machines already out in the field and two more on the way. And as far as having the different models, I mean I’ve got an IM500, several IM1000s and several 2500s. And we’ve got them in locations like the parking lots of liquor stores, marinas, fuel docks, Spanish grocery stores, bakeries and outside of a city park. So that’s a really good mix of places. And having the machines in those types of locations that are so different from each other has really been beneficial because it’s helped me and my wife to understand what kind of customers we really have and why they come to our machines.

So one of the things that I like to do as far as promoting the machines, depending on whether or not there’s actually a business, a walk in business on the property. Some of the things that I like to do is use the coupons and give them to the property owner and have the property owner, let’s say for example, they have a retail store like this boat store here. If they have an item that they want to really push, I work it out with them to where they give coupons to the customers who get that particular item, so they get a free bag of ice with it. In addition to that, I’ve also done marketing campaigns within a one mile radius, let’s say, of the residents in the area where they get a flyer that talks about the machine and the new location and if they bring that flyer to the business, they will get a free ice coupon that they can use.

In addition to that, depending on the signage laws, wherever I’ve got the machine, I’ve had different banners that say 24 hour ice, 24 hour water and that type of thing. Another thing that I’ve started doing is because this machine is made in America, I’ve certainly started putting stickers on here, proudly made in America. But I also want to start putting American flags next to each one of my machines. But we also have done what I call an open house, our grand opening where within the few first few days of having the machine up and running, my wife and I will come out. We’ll set up a tent and we’ll have a water jug with water samples and ice in it, of course from the machine, so that anybody walking by or driving by can taste the water and have a sample of the ice.

And then we give away free coupons as well. And we put a big grand opening sign. And that’s a great way to speed up the process of people knowing that the machine is here. But I think the key is that to me, the machine itself is the advertising. If you look at the great graphics on it, the size of the machine, the blue canopy, very distinct. And I always paint the bollards around the machine blue and that is usually enough to get people’s eyes going to it. And of course at night the machine lights up so it’s good to when people pass by, their eyes are kind of drawn to it anyway.

Different models. I mean I’ve got an IM500, several IM1000s and several 2500s. Now they serve different purposes and I’ve learned that after having them for about a year and a half now. I like the IM500. It’s a smaller machine, it’s simple, it’s flat and wide, so it’s nice to go up against a wall and it’s kind of out of a way, but it still has a good presence to it. The IM1000 is also the kind of machine that you could easily put up against a storefront. But what I like about that machine as well with the canopy on it, you can put it out in the parking lot off of a business. You can really get yourself closer to the road, which is what you want to do with these machines so that everybody sees it as they drive by.

Then of course there’s the 2500. Now that one has a great presence as well. Even though the machine is only about seven feet by nine feet, it’s still a machine, especially with the canopy. It’s very easy to see from the road and I love the way it looks and I know that with that machine, depending on how many ice makers I have up top, I can really, really have that machine crank out a lot of ice. I’ve got two or three locations right now where it’s necessary to have that machine.

Especially, I have one at a Marina and it’s very close to the beach and you’ve got all the boaters, you’ve got the fishermen, you’ve got the beach goers, you’ve got the restaurants, you’ve got all that going on. And that machine, especially on a holiday, is really necessary because when you’ve got people buying so much ice at one time, you really want to have those extra ice makers up top, replenishing that bin as quickly as possible so that everybody gets all the ice they want. And right now I’m sitting here just looking at my Ice Talk remote app to see how the machines are doing, which I love. It’s one of the best things about it, being able to remotely see what’s going on with the machines. And if a customer has a problem, can easily take care of it using the app, which is, it’s a lot of fun and it’s certainly convenient, especially if you have the machines spread out around town.

One thing I would say to somebody just getting into this industry, because a year and a half ago, I didn’t know anything about ice and water vending. I think the biggest thing is to go with a company you trust. And currently that’s Kooler Ice for me. They’re the company that I believe makes the best machines and also they’re very knowledgeable and the machines are well-made, well-built. And so what I would say to somebody that is getting into this for the first time is just like a lot of businesses, location, location, location. That’s the very important thing. If you find a good location, the machines markets themselves because of the graphics and the presence of the machine.

But you want to make sure that you have more than one kind of customer. So not only do we have the people that are fueling getting this ice, and not only do we have the boaters that live here getting ice. But we also have people that happen to be driving by on this road to go fishing or to go to work or to go home. Having that many different sets of eyes on your machine makes it to where your sales on the machine will get to the level that you want and much quicker as opposed to hiding the machine away next to somewhere where nobody can see it. So that’s the big thing. Keep it out in the open and get a lot of eyes seeing it every day.”