Brett has worked as a lineman for electric utility companies for the past 25 years and got started in the ice vending business to create an extra source of income for him and his wife. Brett began his business with a competitor then decided to make the switch to Kooler Ice. Since then he has never looked back! Brett has his machine in a small town of about 500 people, but with a terrific location and simple marketing his sales have been excellent. 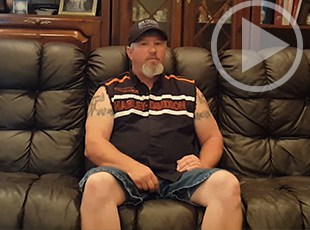 “I’m Brett Gentry, Mena, Arkansas. My ice company is G-4 Vending. I started this just as a extra means of income. I’ve been a lineman on the electric utility companies for 25 years, started when I was 23 and that’s pretty much all I’ve ever done as far as work goes. I’m married, been married 25 years, got two children, one 19, one 23. Got my dog, everybody seems to love him. I love to deer hunt. I love guns. I’m just an old country boy that likes my guns and my hunting and my RZRs. And I ride a Harley and my wife rides her own Harley. And my best friends, they all ride. I just want everybody to know that you don’t have to have a lot of money to do this. I mean, I just took a chance.

Bought a competitor’s ice machine and had nothing but trouble. So I went to Kooler after that and haven’t had any trouble with it. My wife and I were trying to figure out a way of making some extra money when we got closer to retirement. I actually was looking at some property at buying to put a feed store in, in a building where I grew up at, had a feed store there when I was a kid and I worked there. And she wanted to do something that didn’t take up all of our time. And I started researching the ice business as vending so I don’t have to be there and it makes money for me. I probably researched for a couple of months, looking into it. I went with a competitor to start with. Their price was a little cheaper. They had one moving part that intrigued me on it, that way it wouldn’t cost a lot for repairs. That didn’t work out so good. Found out that it wasn’t worth it and it was wound up costing me more money from breakdowns, people not returning because the machine was already always messed up.

That led me into going back and doing some more research and wound up with Kooler Ice. Price wise, probably just a few thousand dollars difference, but a way better product than what the other competitor was. What led me into Kooler Ice was actually, I talked to the salesman, Matt. Talked to him quite a bit about it. He was persistent in talking to me, answering any questions that I had about it. And I read some of the reviews and some of the other testimonials. I listened to some of those and just decided I’d give them a chance to see if their product was as good as they claim it is. And so far, I’ve been satisfied with it.

What I really liked was they actually sent someone with the machine to install it and go over every piece of the equipment on it. And Charles done a great job helping me out, getting me set up on that. And the other machine that I had before, I got the machine off of a truck and had to figure it out myself. Kooler’s just been great with helping do the set up, any maintenance, anything I’ve had trouble with, call, handle it over the phone.

My sales has tremendously jumped up. I have my machine in a town of 500 people. I have a local state park that’s about eight, ten miles away. I have a lake that’s about eight miles away. The first two weeks, I think I sold 200 or 300 bags of ice. Since then, I’ve sold an average of about 900 bags a month in a little small town. I’ve got my machine set up on a very busy intersection. And I had some banners made up that has just nobody’s name on it, just says, “10 pound bag of ice,” and my price on it. I’ve had the free coupons that Kooler Ice sent with the machine. I’ve handed several of those out to different people.

I grew up in this town so everybody knows me and I’ve had people just come to me and to say, “We love it. We’re glad someone finally done this.” Because there was only one place to buy ice and it was always the kind that you got to bounce off the concrete to break up. And people just, they love the fresh ice. Mainly, my marketing has just been word of mouth because everybody loves the fresh ice.

One of my favorite things about the Kooler Ice and the ice business is one, is hands down, they’re great to deal with. Second, it makes money while I sleep. I am happy with Kooler Ice and would recommend them to somebody that’s looking into this business.”