Dave has been in his family’s construction business ever since he was younger and used to work for his father. His construction background makes him mechanically inclined so owning a machine was always a natural fit. Dave decided to install an IM2500 in Clinton to offer customers a convenient and fun way of obtaining their ice. 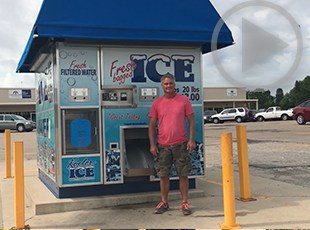 “I’m Dave Waters. I own Waters Construction in Clinton, Illinois. I started construction back when I was young. My dad, he had the construction business going, built a lot of garages, build a lot of subdivisions so we’ve maintained that and have grown that business into a fairly good business from five employees to about 20 employees now. The Kooler Ice was something that were kind of mechanically inclined, so I thought I could get into that. After researching a few of them, I researched several different ice machines and we went with Kooler Ice based on some of their better technical support. First one is always in Monticello and what got me into it is I saw a machine, it wasn’t Kooler Ice, but I was kind of interested in it and I thought it would be a good fit in Clinton even though there’s another ice company here that sells wholesales to the grocery stores and the country clubs and stuff.

But it made sense to have something where the boaters come in right out of a gas station, pull right up, they can get their water, they can get their ice. And it made a real convenient for them and I thought it would make a good supplementary income for kids going to college or whatever, vacations that we wanted to spend it on later on in life. The reason I chose Kooler Ice was the technical support they had, the credit card machine, and it’s a lot more convenient to use, people friendly. The people that actually sold it to us were easy to deal with and tech support was there for us. When we first started with my partner, Dan and myself, he did all the communication with Kooler Ice to get everything set up in there. I came into play when they needed the heavy equipment and all that under infrastructure set up so that we could set the machine on it. I took care of all that and then the guy that brought it down was a guy named Scott.

Nice guy. He came in, set everything up. They had everything there that they said they would do and we had everything we said we would do. Set it up. He spent the day getting it going. Stayed the next day, informed us on how to run it and showed us what needed to be done, maintaining it and doing various things that could possibly be a malfunction. But it all functioned great right off the bat and it’s gone from … it’s probably jumped from the very first year we had it. But once people knew where it was and they knew they could come get water and get ice out of that, it’s really helped. It’s probably jumped two to $3,000 a year in the three years I’ve had it, which is great.

Some of the favorite things, I don’t know if you’d call it favorite, but the purification system of the water, I mix it to where it’s … you waste about three gallons to get one good gallon. But the water in the City of Clinton is full of iron and minerals so not a lot of people drink it. And I’m happy to be part of a community that we can give them some pure water that’s economical and easy to get ahold of. They can pull in, they can load it, they can drive off with it. Just having a source for the people in the community to drink, I think I’m giving back to the community along with a little bit of payback in return. And people know you as the ice guy or the contractor or whatever, but it’s becoming more and more the ice man.

A good piece of advice for anybody that’s looking to buy, and do your research on them, you’ll find that if you’re after the technical support Kooler Ice is probably number one, bar none. You might want to have a little bit of mechanical experience in it. There’s ups and downs to everything, but the return and the efforts that you put into it I think are … outweigh anything. I mean every time you get in a new business, there’s always something that it requires more time. And there’s only so many hours in a day, but I don’t have to devote as much time to this as I do other things or maybe enjoying life a little bit.”