After retiring as a successful Allstate agent, Rhett was looking for something to do to occupy his time and become a sound investment. 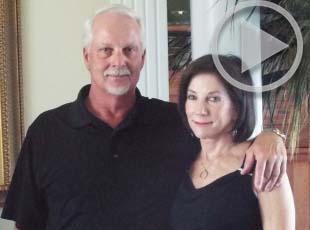 “I’m Rhett Abercrombie. Before Kooler Ice, I was an Allstate agent for almost 30 years. I had my own insurance agency, employed several people, had around roughly 5,000 customers. Pretty successful agency, took early retirement, retired at 55, kind of tried a few different things. Even went back to school to study to be a registered nurse, figured out real quick that was not what I wanted to be. Did a little stint as a postal carrier for awhile, decided that wasn’t what I wanted to do. You get bored real quick when you’ve been used to working all your life.

Well, actually we were having a party here at the house and back here behind us I’ve actually got an ice maker and we didn’t have enough ice and there is another competitor’s ice machine not far here from the house. Went up there and the owner of that ice machine came up and in talking with him found out that it was a lucrative business. He said that he was making money at it. So when I looked into the business model, I found out the Kooler Ice seemed to have a better model, a better price, a better business model, looked like a good picture to get into. And it has turned out, in my case, two actually be a good model making money. Thank God.

When I first started talking to him, Matt Myers, is one of the sales managers down there. I think it was the 810, I believe the smaller machine, was what I was looking at and he told me that I might want to consider the bigger machine because he kind of looked at the geographic area where I was going and he said I want to get the bigger, because I think the 810 only holds 850 pounds of ice.

But I wanted to spend as little as possible. So I got the 810, and two months in, I had picked a good location, couldn’t keep ice in it. Now I bought it right at the very beginning of summer and it was selling out. I mean literally by, on the weekend especially, like on Friday by 11 o’clock, 12 o’clock, it was out ice.

The machine could not keep up and it was like that all the time. So we were just consistently losing money, losing sales. And so we worked out a deal, traded that machine back on the 2,500, got the bigger one. And of course since that time, since I got it, and bless his heart, he tried to tell me when I got that machine that I needed, you’re laughing, that I needed the two ice makers instead of the one. But being the typical Scottish ancestry and being tight with the money, I said, “I want to get by with just the one ice maker.” Turns out Haley was right. I needed two ice makers. So now I have two ice makers.

Well we bought some of these signs, the little signs, they kind of look like the political signs the candidates put out, like vote for me so and so. We put up some of those initially, we put up one of the big flag that flaps and follows the wind and kind of gets your attention if you’re driving by, which that has helped a lot.

Not so much. We’ve not done any media advertising, so to speak. We’ve given out some of the free coupons to various people. One of the things that we did do, we’ve got our business card on there, it says, if you have a problem, give me a call. And the people will. If they’re at the machine, they won’t hesitate to call you and say, “I just put $5 in or $2 in and your machine didn’t give me any ice, you know, took my money.”

And when they do that, I always let them know, send me a text message, give me your name, give me your address and I’ll make it right for you. So normally what I’ll do is I’ll send them those coupons for free ice and if they lose say two or three dollars, I may send them say six or seven dollars worth of coupons. I always usually kind of double whatever they lost. And several times I’ve been at the machine and people will be there at the machine and they’ll say, “Well, you may not remember me, but you know it glitched, you sent me the coupons. I’ve used all of them up, but I’m back up here buying some ice. And the reason I’m back is because even though it wasn’t a lot of money, the fact that you took the time to send me the free coupons and you sent me a lot more than what I spent, and I’ve told all my friends about it. I’m not buying ice anywhere but here and I’m trying to get all my family, all my friends here, everybody, I told him to come up here to get it.” You know, there’s just that little gesture and we’ve seen our volume, our sales, just keeps boom, boom, boom, boom, boom.

Money. I like going up there when that thing’s full of money, taking out a little thing is just slammed full of money. Oh, it’s the simplest. I mean as far as servicing the machine, loading the bags, taking the money out, putting all the, I mean the basics are easy and the technicians, the guys there in Georgia are really good about helping you.

But the machine itself, I mean it seems to be pretty dependable. I mean we haven’t really had issues with mechanics breaking down or anything. I mean we’ve had a little minor glitches and things, but everybody has been really good. We panic when it shuts down because we’re losing money. But most of the technicians, anytime anything’s happened, they kind of panic with us, and they know, so they get us back online or they fix it quick. So yeah, it’s been a good machine.

Pay attention to the thing about the size, like I said, Matt was trying to, he was actually not upselling, he was trying to sell me the right machine because you’ve got to be able to keep up with demand. If you run out of ice, you’re not going to make any money. But then that goes back to your location. Probably more than anything else. Do your homework, figure out where you’re going to put it. But yeah, location, I’d say probably is your biggest thing. And second thing, being, get a machine that can handle the volume that you’re going to hopefully get, but that’s about it.”