Billy Chambliss, owner of Billy’s Supermarket in Catoula, GA, has been in business over 30 years, a business that he took over from his father who began it shortly after World War II. 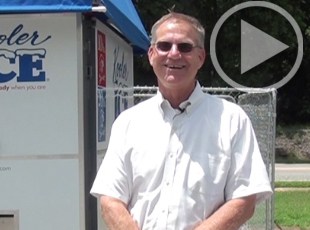 “Hello, I’m Billy Chambliss from Billy Supermarket in Cataula, Georgia and I have been in business here for over 30 years and my father was in business for 20 years before that. He came out here right after World War II.

I began to see them springing up all over Florida and I thought that here in Georgia, it’s mighty hot too and we could use some ice machines up this way. And I began to see them spring up around the Columbus Market and I didn’t want to be the last one on the block go have ice machine. And so I thought we needed one out here and I began to look into it. And I was at the ag show down in Moultrie, Georgia and I saw the ice machines down there and actually saw Kooler ice down there. I like the price of the Kooler ice machine in comparison to the others. And it was really something that I felt like I could afford where the other machines were a lot more expensive.

We started off with our machine exactly three years ago from this month and the machines started off a little slow, but by the second year that we had the machine, by the weekend it was selling out. We were selling out of ice every Saturday. And then by the third year I put another machine on top to help get our capacity up. We went to the factory and they showed me the bigger machine. It was not really in production at that time, but they were just fixing to go into production on it and had I really seen and looked into that, that would be the machine that I would have chosen because I really like the new machine.

Basically the machine, we’ve got it out by the road, very high traffic area and basically the machine has just been a word of mouth and promotes itself. One of the things that you’ll find with the machines is that when I came over real early in the morning, the construction people would be lined up out before daylight, even buying ice with the machine. And it’s a 24 hour vendor where my store, I’ve still got ice out here but it’s only here for the hours we’re open and you’re selling ice now 24 hours a day.

Well, I like the way Tommy and the service department, when you do have a problem, usually they can talk you right through it over the phone and it’s not a big deal. And the way they work with you.

Make sure you buy one big enough because you’re going to sell the ice.”